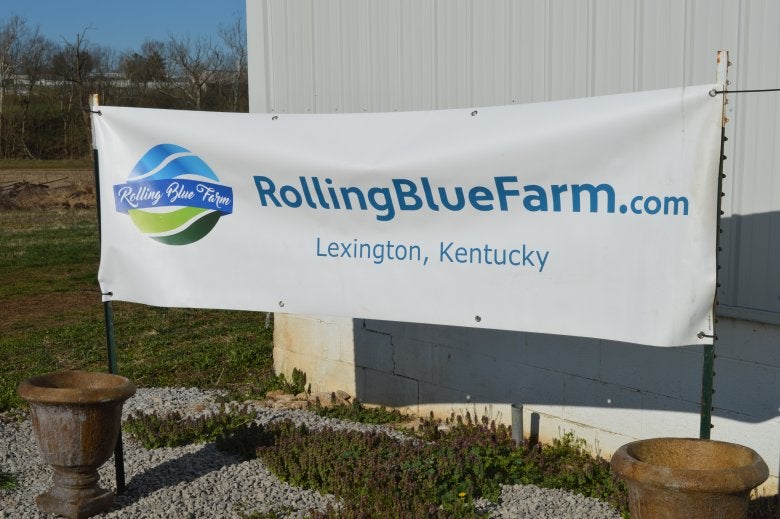 Fayette County, Kentucky, is hundreds of miles from the Atlantic Ocean, but that hasn’t stopped Jason and Heather Whitis from starting a fresh saltwater shrimp business on their farm. Rolling Blue Farm is a full-time fruit and vegetable operation, but the Whitis family wanted to offer something unique they could market year-round. With some ingenuity and hard work, the answer turned out to be saltwater shrimp.

Jason insulated the inside of an old tobacco barn and installed nine small swimming pools. “We heat the water, not the inside of the barn,” Jason explained. “We purchase the baby shrimp from Florida, about 30,000 shrimp at a time.” That is enough to fill up four pools, and each pool produces around 250 pounds of shrimp.

The shrimp is sold fresh, never frozen – and always with the head attached. Most frozen shrimp doesn’t include the head, but Jason explained that cooking the shrimp with the head adds extra flavor to the meal.

The biggest challenge Jason faces with producing shrimp is controlling the water quality. “We feed the shrimp twice a day, and we measure the amount of feed that goes into the pools,” he said. The amount of feed must be precise to keep the water healthy. Twice a week Jason tests the amount of ammonia and nitrates in each pool and monitors feed intake.

As first-generation farmers, Jason and Heather truly understand what it takes to build an operation.

Jason is originally from Somerset and wasn’t raised on a farm. However, after graduating from high school, he worked on a fellow church member’s farm, where he realized his passion for agriculture. “The farming bug bit me,” Jason said.

He majored in horticulture with an emphasis on vegetable production at the University of Kentucky. After college, he and Heather married and decided to get started farming before having their child, Lillian Grace. What started out as a part-time venture soon grew into Jason’s full-time career.

“Farming has brought so many values to our family – the value of hard work and the ability to work together,” Jason said. “I enjoy having my hands in the dirt; there is something so simple about it, but yet so complicated. There is such a complexity to producing and growing the shrimp. It is challenging, but also rewarding.”

Rolling Blue Farm produces a total of three acres of tomatoes, five acres of sweet corn and one acre of beans, along with cucumbers, squash, broccoli and strawberries. The farm has two greenhouses that together hold 700 tomato plants producing both early and late crops they sell at the farmers market. “I love taking products from the farm to the farmers market and getting the positive feedback from customers,” Jason said.

Their newest venture is off to a great start, too: The farm sold over 6,000 pounds of shrimp last year. Jason has worked hard to research farming practices and educate himself on both time-tested and new techniques. “To be successful, you have to be involved and network with others. Learn how to market your product, and learn from other farmers on how to manage your farm. There are a lot of people who are willing to help,” he said.

One of those advisers is Central Kentucky Ag Credit Loan Officer Lisa Yeager. “I first met Lisa and Ag Credit through my connections with Kentucky Farm Bureau (in 2015); it has been a great relationship,” Jason said. “She is always willing to help with any questions I have and to help with any rates and products I need.”

The next step for the Whitis family is to open up their operation to the public. They will offer tours of the shrimp operation this summer and operate an onfarm market, where they will sell shrimp and produce.