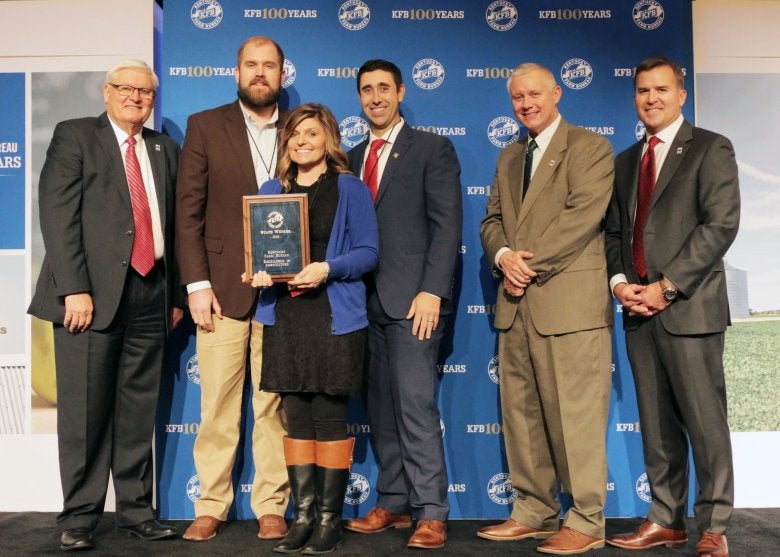 Ben and Savannah Robin from Bourbon County have won top honors in Kentucky Farm Bureau’s (KFB) Excellence in Agriculture Awards program for 2018. The couple received the award during the organization’s recent annual meeting.

The Excellence in Agriculture competition awards first, second and third place distinctions each year to individuals or couples under the age of 35 who contribute to and exhibit leadership growth from consistent involvement in Farm Bureau and other agriculture and civic-oriented organizations. To qualify, contestants must not have the majority of their income subject to normal production risks associated with farming.

Ben and Savannah both grew up on family farms understanding the efforts needed to keep those farms sustainable. They currently maintain their own farm, a cow/calf operation, in addition to off-farm jobs. Ben is an Information Systems Coordinator for an agricultural lending institution, Central Kentucky Ag Credit, while Savannah is the UK Ag Equine Internship Coordinator for the University of Kentucky College of Agriculture, Food and Environment.

Both are active in various agricultural-related programs in their community, including their local Farm Bureau.

For the win, the Robins represented Kentucky in the national competition at the American Farm Bureau Federation (AFBF) annual convention, held in New Orleans, La. The Robins were also presented with a John Deere Gator, courtesy of Farm Credit MidAmerica, and an expenses-paid trip to the AFBF annual meeting.