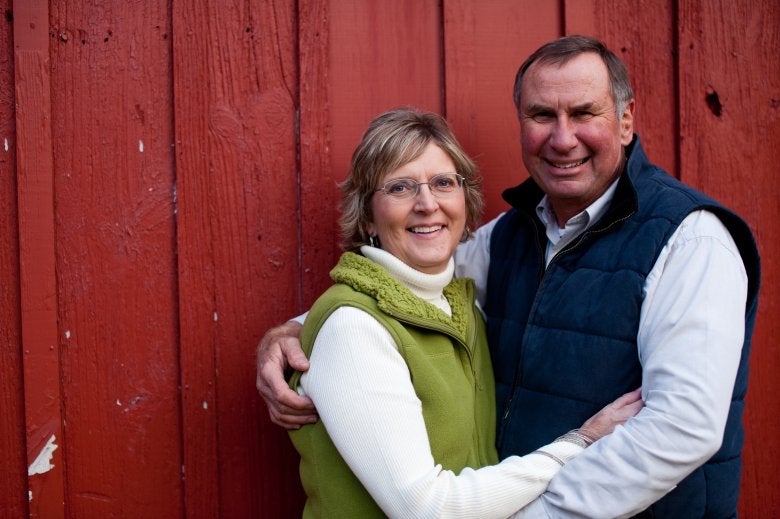 As we walked the gates open for an incoming seed delivery, Jim May remembered as a child, his first job on the farm was doing this very thing. “I swore once I got my license I would make my dad open all the gates,” we laughed as he latched his gate to the fence. As menial as this job may have seemed as a child, and even now, this simple task would allude to his life and legacy to come. G

rowing up on a Casey County tobacco and cattle farm, dad as the county Extension Agent, it was inevitable that Jim would somehow be involved in agriculture. From a young age, he found his responsibilities, whether opening a gate, stripping tobacco or feeding cattle, were vitally important to the well being of the family and the farm. “Being raised on the farm and then raising my family on the farm have been very important to me. There are so many values that are caught, and not taught, by this type of upbringing.”

Hard work, perseverance and respect seemed to be the very foundation on which Jim’s character was built, just as it is with many of those reading this of similar childhoods. You tended your chores because if you didn’t, something would die. You fed or planted, because your family’s livelihood depended on it. You helped others in times of need, knowing they would do the same for you. These types of life lessons are caught everyday on the farm, and were likely deepened for Jim, as the 100 acre family farm was on a hillside. According to his father, this was an ideal location as it allowed him to “farm both sides of the hill.” Whether a man was just trying to maximize his farm ground, or finding a unique way of teaching his son how to endure through tough situations, opening gates may have been the ultimate transcending lesson Jim learned.

He thought he had opened the last gate when he left the family farm to attend the University of Kentucky. May worked on the UK farm through college and after four years, earned a Bachelor’s degree in Agricultural Economics. The work ethic developed growing up and furthered by his heavy involvement in ag organizations like 4-H and FFA, helped Jim succeed in most everything he turned his hand at, though one of the toughest gates he would have to open would be the one to Mary Ann Colyer’s heart.

Jim and Mary met at 16, on a bus trip to Fort Collins, Colorado, where they were two of fourteen 4-H members selected to represent Kentucky at the National American Private Enterprise Conference. Mary, a native of Pulaski County, was well acquainted with agriculture, as her family raised cattle and tobacco. Like Jim, she had caught many of the same values growing up, which may have inevitably drawn them together.

They had dated off and on for several years during high school and college. Mary had promised herself she’d “never marry a farmer”. Unbeknownst to her, Jim was determined to change her mind. After three years together, they finally decided to make things official. They were only engaged for five weeks before the couple tied the knot. This year, Jim and Mary will be celebrating their 50th wedding anniversary in August.

Together they have two daughters, Allison and Emily (four grandchildren), grown their farm to 1,000 acres and established a successful seed operation, all while being heavily involved in many community events and organizations. Jim credits Mary for many things, but especially for always being supportive and “subsidizing his farming habit,” through her teaching career. They have caught countless life lessons together over the years including—love, loss, compromise and maybe even a little tenacity.

On a Friday in May of 1971, Jim graduated from UK; the following Monday, he began his career with Central Kentucky Production Credit Association (PCA)—the preceding organization to Central Kentucky Ag Credit. After weeks of “reading credit manuals and getting in the way,” Jim closed his first loan. He remembers issuing a $25,000 check but asking the loan assistant to double check to make sure he had enough zeros. “[I] had never written a check for more than $25,” May laughed.

That loan opened the gate for a farmer, providing them access to the capital needed to put that year’s crop in the ground. The immediate impact of knowing his work had helped someone was his ultimate satisfaction. Throughout his 15 year tenure with PCA, Jim was able to help countless farmers in his community secure the funding needed to achieve personal and operational success. He was able to find common ground with his customers through the mutual life lessons caught growing up on the farm, while educating them on financial management and providing sound credit advice. The work in the office and within the community made Jim a confidante for many of his farming customers.

Jim rose to the rank of Vice President of Credit; a role which enabled him to share his background and knowledge with staff members outside of his own office. During the 1980s, this position meant he was something of a “circuit rider,” traveling between branches to assist and oversee the lending operations. The Richmond PCA hired a new loan officer in 1982, which meant Jim would be spending extra time in that office to get the new hire on his feet. As he did with all new hires, Jim provided the guidance needed to ensure the loan officer well trained and the customers were well taken care. Fast forward 37 years and that new hire is now Ag Credit’s President and CEO, Jim Caldwell. He fondly remembers the role Mr. May played in helping him establish his career. “Jim May served as a mentor to me and a lot of employees. He was always willing to roll up his sleeves and join the staff in whatever project we were undertaking at the time.” Jim May always went above and beyond his job, which helped open gates for so many others like Caldwell.

Jim May stepped away from Central Kentucky PCA in December 1986, to pursue full-time farming, but his service to the organization was far from over. In 1990 he was appointed to fill an unexpired term on the Association’s Board of Directors. This appointment was the beginning of 28 years of service on the local cooperative board, where members elected him to serve eight consecutive terms.

In addition to his long standing service as a director, Jim was also the Board Vice Chairman (1991 –1999) and the Board Chairman (1999 – 2011). “During his service, which included the 1994 re-affiliation with AgFirst Farm Credit Bank, and the start of the Association’s successful patronage program, Jim provided outstanding leadership, oversight and guidance,” commented Alvin Lyons, current Ag Credit Board Chairman. Being a cooperative member, a former employee and a farmer, May realized the importance the local Board had to ensuring farmers in our area were able to receive the products and services needed to be successful. He was an advocate for programs that helped farmers and rural residents, while maintaining a strong cooperative core.

Jim’s service was extended beyond our 17 county territory when he was selected to serve on the AgFirst Farm Credit Bank Board, in January of 2006. May was one of only 17 directors elected to represent 15 states, and Puerto Rico, across the eastern and southeastern regions of the United States. AgFirst is the primary funding source for 19 associations, including Central Kentucky Ag Credit, with over $30 billion in assets. Being a local voice as a farmer and former lender, May was able to contribute to countless polices and procedures implemented at the regional level, which would still have vital impact to our local producers. Even though this role was very demanding on his time, sometimes meaning days away from the farm and his family, Jim understood the importance of the cooperative model and how his voice and views could help open gates for the 90,000 farmers, rural homeowners and agribusinesses he was representing. He would be elected to the AgFirst Board for two more terms, serving 12 consecutive years as a regional director, the maximum number allowed under the organization’s bylaws.

Jim May’s final term was concluded in February 2019, leaving a 43 year legacy for Ag Credit staff and cooperative members to reflect on—15 years as an employee and 28 years as a Director. He fondly remembered those met along the way and the relationships formed as a result of his tenure with Ag Credit, saying he “would miss the people the most.” He is proud of the progress our Association has made and the positive impact Ag Credit continues to have within our local communities. Jim reminded me and staff members to “stay engaged and listen to those we represent,” as to not lose sight of our cooperative mission.

In a Resolution passed on December 20, 2018, the Ag Credit Board of Directors recognized Jim May for his “tireless work to advance the cause and livelihood of farmers and rural residents in Central Kentucky” and advocacy “of the cooperative principles.” When asked what he would like to be remembered for, May smiled and said, “We all stand on the shoulders of others; I hope I’ve provided someone the shoulders they needed.

Even in his absence, we will continue to appreciate Jim’s contributions to the success of our producers, staff and cooperative. Through his outstanding leadership and guidance, we are a stronger association, existing to provide a valuable service to our members. We are eternally grateful for not only Jim’s unwavering service over the last four decades, but for his family’s generosity in sharing him. A life full of lessons caught and shared, he has opened the gates for countless people. I hope you think of Jim May the next time you open a gate and remember no matter how menial a task may seem or how small a difference you think it makes, the impact may last well beyond that single moment. And as Jim has done for so many, I hope we can all help open a gate along the way.