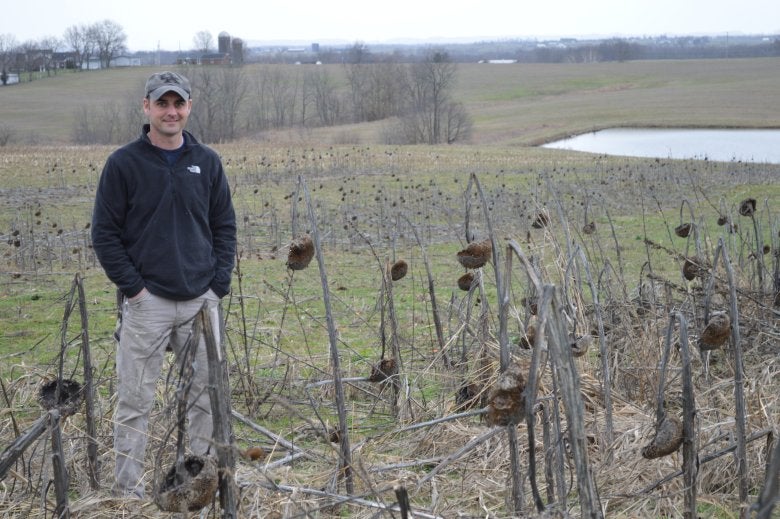 Few things bring as much joy to George McCain as his growing family, farming and upland birdhunting.

Growing up, George and his three brothers and sister helped their parents raise beef cattle and burley tobacco, and he always knew he’d sow the seeds of his own future in the fertile soil of central Kentucky. After graduating from the University of Kentucky in 2006 with a degree in Agriculture, George began growing tobacco on rented farmland. A few years later, he changed gears and began working as an extension agent and then as a crop consultant. “While I learned so much about agriculture, along with management of employees and time, there was still that itch to get back onto the farm full time,” he said.

In 2014, George and his wife Laura Leigh bought a 158-acre farm in Washington County and he went back to farming full time. “I’ve always had a dream of living on a farm that we own and raising our family on that farm,” George said. “A lot of this wouldn’t have been possible without Ag Credit’s AgStart program, because we were able to purchase our farm and then build my wife’s dream house. For what our goals were, these loan programs offered just the opportunity.”

Today, their operation raises grain and Holstein heifers, which the McCains receive when they’re 200 pounds and raise them until they’re about 750 pounds. George credits Laura Leigh for being an incredible partner and mom to their two children Owen, 6, and Mary Leigh, 4. The young family is excitedly preparing for a third child, who’s expected to arrive in May.

“Our long-term goal is to give my kids the opportunity, if they choose, to farm, and to have a leg up if they’d like to continue in agriculture,” George said.

In 2018, the McCains partnered with George’s youngest brother, Fergus, to buy 444 acres in Washington County. The brothers focused their energies on feeder cattle and grain crops, but they also began a new business venture, which sprang from fond childhood memories of pheasant-hunting trips with their dad in the Midwest.

Their joint venture, Bluegrass Upland Hunts, offers guided and non-guided hunts to sportsmen and women seeking memorable wingshooting experiences. Hunters can use the brothers’ dogs or bring their own to flush out a variety of gamebirds, including pheasant, quail, dove and chukar. The brothers also conduct youth and bow-only hunts for Whitetail deer and wild turkeys.

After the hunt, visitors can relax in the remodeled milking parlor for delicious, home-cooked meals, cozy overnight accommodations and views of breathtaking scenery.

“It’s an exciting new venture, we enjoy doing it and I think the people that come here enjoy themselves,” said George.

After establishing a relationship with Ag Credit in 2008, George chose Central Kentucky Ag Credit years later because of the team’s deep agricultural knowledge and willingness to work with farmers.

“Richard Medley, Ag Credit’s Vice President of Credit, knows the in’s and out’s of young farmer programs and can explain them in a way that’s easy to understand, since he’s a young farmer himself,” George said. “Central Kentucky Ag Credit has been an excellent partner as we continue to grow.”